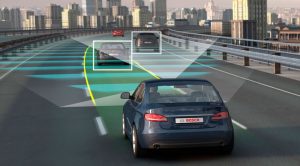 The self-driving cars are the latest technology for   which many big companies are investing in the   present days. Self-driving vehicle (also known as a   driverless car, self-driving car, robotic car,   autonomous car etc.) is a vehicle that is capable of   sensing its environment and navigating without any   human input. Autonomous cars use a variety of   techniques to detect their surroundings, such as   radar, laser light, GPS, odometry and computer   vision. Advanced control systems interpret   sensory information to identify appropriate   navigation paths, as well as obstacles and relevant   signage. Autonomous cars must have control   systems that are capable of analysing sensory data   to distinguish between different cars on the road.

Experiments have been conducted on automating   driving since at least the 1920s; promising trials   took place in the 1950s. The first truly autonomous   prototype cars appeared in the 1980s, with   Carnegie Mellon University’s Navlab and ALV   projects in 1984 and Mercedes-Benz and   Bundeswehr University Munich’s EUREKA   Prometheus Project in 1987. Since then, numerous  companies and research organizations have   developed prototypes. In 2015, the US states of   Nevada, Florida, California, Virginia, and Michigan,   together with Washington, D.C. allowed the testing   of autonomous cars on public roads

In 2017, Audi stated that its latest A8 would be   autonomous at up to speeds of 60 km/h using its   “Audi AI”. The driver would not have to do safety   checks such as frequently gripping the steering   wheel. The Audi A8 was claimed to be the first   production car to reach level 3 autonomous   driving and Audi would be the first manufacturer   to use laser scanners in addition to cameras and   ultrasonic sensors for their system.

In November 2017, Waymo announced that it had   begun testing driverless cars without a safety   driver at the driver position, but with an employee   in the car.

Autonomous cars are being developed with deep   learning, or neural networks. Deep neural   networks have many computational stages, or   levels in which neurons are simulated from the   environment that activate the network . The neural   network depends on an extensive amount of data   extracted from real life driving scenarios. The   neural network is activated and “learns” to   perform the best course of action. Deep learning   has been applied to answer to real life situations,   and is used in the programming for autonomous   cars. In addition, sensors, such as the LIDAR   sensors already used in self-driving cars; cameras   to detect the environment, and precise GPS   navigation will be used in autonomous cars

The potential benefits of autonomous cars include   reduced mobility and infrastructure costs,   increased safety, increased mobility, increased   customer satisfaction and reduced crime.   Specifically there would be a significant reduction   in traffic collisions, the resulting injuries, and   related costs, including less need for insurance.   Autonomous cars are predicted to increase traffic   flow, provide enhanced mobility for children, the   elderly, disabled and the poor, relieve travellers   from driving and navigation chores, lower fuel   consumption, significantly reduce needs for parking   space; reduce crime; and facilitate business models   for transportation as a service, especially via the   sharing economy. This shows the vast disruptive   potential of the emerging technology. A frequently   cited paper by Michael Osborne and Carl Benedikt   Frey found that autonomous cars would make   many jobs redundant.

Among the main obstacles to widespread adoption   are technological challenges, disputes concerning   liability, the time period needed to replace the   existing stock of vehicles, resistance by individuals   to forfeit control, consumer safety concerns;   implementation of a workable legal framework and   establishment of government regulations, risk of   loss of privacy and security concerns, such as   hackers or terrorism, concerns about the resulting   loss of driving-related jobs in the road transport   industry, and risk of increased suburbanization as   travel becomes less costly and time-consuming.   Many of these issues are due to the fact that   autonomous objects, for the first time, allow   computers to roam freely, with many related safety   and security concerns.

With the emergence of autonomous automobiles   there are various ethical issues arising. While   morally, the introduction of autonomous vehicles   to the mass market seems inevitable due to a   reduction of crashes by up to 90% and their   accessibility to disabled, elderly, and young   passengers, there still remain some ethical issues   that have not yet been fully solved. Those include   the moral, financial, and criminal responsibility for   crashes, the decisions a car is to make right before   a crash, privacy issues, and potential job loss.

There are different opinions on who should be   held liable in case of a crash, in particular with   people being hurt. Many experts see the car   manufacturers themselves responsible for those   crashes that occur due to a technical malfunction   or misconstruction. Besides the fact that the car   manufacturer would be the source of the problem   in a situation where a car-crashes due to a   technical issue, there is another important reason   why car manufacturers could be held responsible:   it would encourage them to innovate and heavily   invest into fixing those issues, not only due to   protection of the brand image, but also due to   financial and criminal consequences. However,   there are also voices that argue those using or   owning the vehicle should be held responsible   since they know the risks involved in using such a   vehicle.

A large majority of today’s youngsters fall prey to   early deaths due to vehicle accidents. These are   These are generally due to human fault rather than   machine fault. So what if these machines could   take control of the human part of driving? The   vision here isn’t just the introduction of some new   and attractive technology. It is about bringing about a change that would save thousands of lives, a   technology that would make future generations   look back at us and say how ridiculous it was that   humans were driving cars. It is about being the   change the world needs.