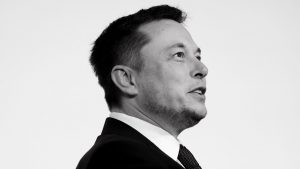 The Falcon Heavy’s boosters burned for 154   seconds before they were jettisoned into space.   Free from the main body of the rocket, they spun   180 degrees and arced back towards the earth,   burning their engines again as they descended to   Cape Canaveral, to land, smoothly, improbably   upright, within a second of one other. Meanwhile,   the main rocket pushed on, preparing to bring the   world an even less credible sight. Four minutes into   the flight, the nose cone broke apart to reveal its   payload: a cherry-red electric sports car, with the   top down, in space – a PR stunt for the ages.

It was all brought to you by Elon Musk

The sports car in the nosecone was one of Mr.   Musk’s own Tesla Roadsters. Its stereo was   programmed to play David Bowie’s Space Oddity   on repeat as it travels for millions of years through   space. Or until the battery dies, anyway.

The ways that the mission and the rocket at the   center of it are used will come to define our future,   too. It is the beginning of the most important market in the universe, and some of the most   spectacular trips ever seen; we are going to leave   the Earth and explore the planets of our solar   system, it seems, and a Tesla car and the dummy   inside it have had a taste of that future.

Why the hype you say?

The installation of Mr. Musk’s own car in the rocket   is a sign of the real reason this launch is such a big   deal: it is being done by a man with a flair for a   story, and the desire to make people talk about   him and what he’s doing. There’s no reason for the   car to be going to space apart from as a talking   point – indeed, the rocket could carry some   important scientific instruments instead – but   when viewed as a publicity stunt for a private space   company that hopes to be the future of corporate   space travel, everything makes a little more sense.

Next Meltdown and Spectre