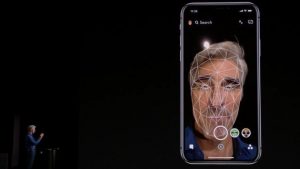 Today, we live in the world of Internet where each   and every part of life is up for show online. We are   under constant surveillance by the Government as   well as other parties. In the midst of all these   Apple’s new iPhone has hit the markets. In addition   to its numerous other awe-inspiring features, the   new iPhone X comes with the widely celebrated   ‘FaceID’.The consequences of which aren’t limited   to just Apple or the rich and powerful.

Face ID is a new and upcoming tool in the field of   technology. According to Apple, it provides   intuitive and secure authentication enabled by the   state-of-art TrueDepth camera system with   advanced technologies to accurately map the   geometry of your face. Apple isn’t the first   company to come forward with this idea but   certainly the brand name warrants for excitement   and attention towards the project.

The TrueDepth cam of the iPhone X creates a   depth map and infrared image of your face by   projecting and analyzing over 30000 invisible dots.   The A11 Bionic chip is involved in checking   matches between the enrolled facial data and the   saved one. Face ID’s features such as recognizing   faces with scars or even in the darkness are quite   attractive indeed. But the question of security still   remains. Even though Apple has claimed that the   incredibly sophisticated system will take a lot to be   fooled, past failures from other manufacturers and   comments from security experts seem to disagree.

Apple claims that the face data is secure in the   phone. But the consequences of this data getting   into the hands of the wrong people are terrifying.   The fact that the camera is always functioning adds   to the list of worries. In a country like India where   the introduction of the Aadhaar system raised a lot   of ruckus, it is strange that Apple has been able to   sneak in with this tech.

It is a well-known secret that Governments and   social networks like Facebook are monitoring our   day-to-day lives. In such circumstances the advent   of technology that makes physical data of the user   readily available is a threat indeed. Tools like Face   ID, through their outward appeal, may creep into   people’s lives and lead them into traps.

Another big argument against the safety of such   tools is that they are not under the complete   control of the user. It makes it easy for people   looking to steal data as all they have to do is take   the person and get his face scanned. This makes   Face ID even more vulnerable than the usual   pin-code or password locks.

Even though Face Detection is a big advancement in the field of technology, it remains a   double-edged sword that can strike either way.   Technology was developed for the good of   mankind. It was intended to make life better while   staying in the moral grounds. The security of the   people is of utmost importance. We should know   that our lives are our own and that we are not just   some puppets who can be manipulated easily. So it   is up to us to take a stand against injustices to our   privacy and security.

Next Indie games are the real deal